I’m proud to give you the first guest post by our daughter Faith Weaver. Faith is a dancer, writer, and an incredible young woman-of-God. Watch for the link for her coming blog for her first novel! (She is also the amazing photographer of many of the photos I use on this blog, including the one below of her writing desk!)

It sticks to the roof of your mouth. It adds just the right amount of savory to chocolate. It makes everything sticky. And it helps writer’s block. Yes, that’s right. Peanut butter is a magical property that can seep into your brain cells and unlock the deepest blocks when it comes to writing. So, when I think of peanut butter, I don’t taste peanut butter and jelly sandwiches for lunch and Reese’s on my smores. I don’t think of sticking my finger in a brand-new jar of Jif (family tradition that grosses my husband out). I think of writing.

When I was young, my mom taught me the love of writing, just as she did my sister. I would sit beside them as they wrote, listening to them tap the keyboards as they poured out their thoughts, and then suddenly, silence. The quiet consumed the room as they 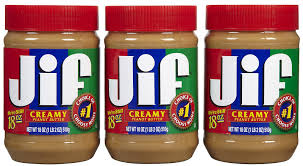 thought of what wonderful words they should type next. Then came the well-known sound of the backspace bar as sentences were written … re-written … deleted … changed … written the same way as the first time … and then deleted again. Finally, one of them would grab a jar of peanut butter which was never too far away, and they’d scoop out a spoonful to eat as they thought. Somehow, the magic never failed and soon they would be back to typing away.

Eventually, I became curious and asked what was so special about the jar of peanut butter, to which they replied that the peanut butter was “Writing Peanut Butter,” and it helped with writer’s block. It was like joining a secret club! My excitement over sharing something so special with my mom and sister, whom I idolized as a kid, made me feel like I was walking on clouds. And the biggest surprise: it worked! The peanut butter was actually magic! As I grew, I always had a jar of peanut butter beside the computer, and when I moved out, it was the first thing I bought for my home office. (NOTE: Generic brands aren’t magic, they’re just messy!)

Now, as the Montrose Christian Writers Conference draws closer, I am spending more and more time in front of my computer trying to write furiously. But with extra writing comes extra writer’s block, and I will be forever grateful that my mom and sister instilled me with the great peanut butter secret. Dipping a spoon into a jar of creamy goodness (crunchy peanut butter is an abomination) always starts my creative juices flowing again. I like to think the stickiness is pulling the block away, leaving a fresh path of thought in its wake. As I’ve said before and I’ll say again: “Writing Peanut Butter to the rescue!”

*** What does opening a new jar of peanut butter mean to you? Please, share your story! Click on the words beside the date of this post. Scroll down to the box with the heading, “Leave a reply.” Thank you for sharing!

*** The week after the writers’ conference always means anticipation! It’s also the end of my Christmas-in-July events. Check the post next week to see what I’ll be doing to anticipate the actual December 25th celebration of Christ’s birth!

13 thoughts on “Tell Me a Story about … Peanut Butter!”